When I moved into my townhouse shortly after my divorce 4 years ago, the garden 🐛 🐌 🐞 was a shamble and in disarray [the tenants obviously weren’t the ‘green-fingers’ type] so I pretty much had to start from scratch with everything from the root up.

I decided to get my house 🏡 in order and focus on creating this new space on which to ‘imprint’ with my twins (a.k.a. the minions), a space to nurture and call OURS. When I say nurture…. I really mean “go to garden jail, do not pass GO and definitely do not collect R200”. The most empowering part of this was that all the decisions were mine, no one to confer with, no one to dissect my choices [a bit of girl power].

So, I commenced with ‘Project Garden Overhaul’… one flower bed 🌹💐🌻 and patch of grass at a time. It’s taken a couple of summers☀️ to get it just the way I want it, but I’m really proud of it [insert cheesy grin here]. It’s become a very content place, full of ridiculously loving and healing energy 💫♥️ for myself, my boyfriend and the minions to relax and spend time together. 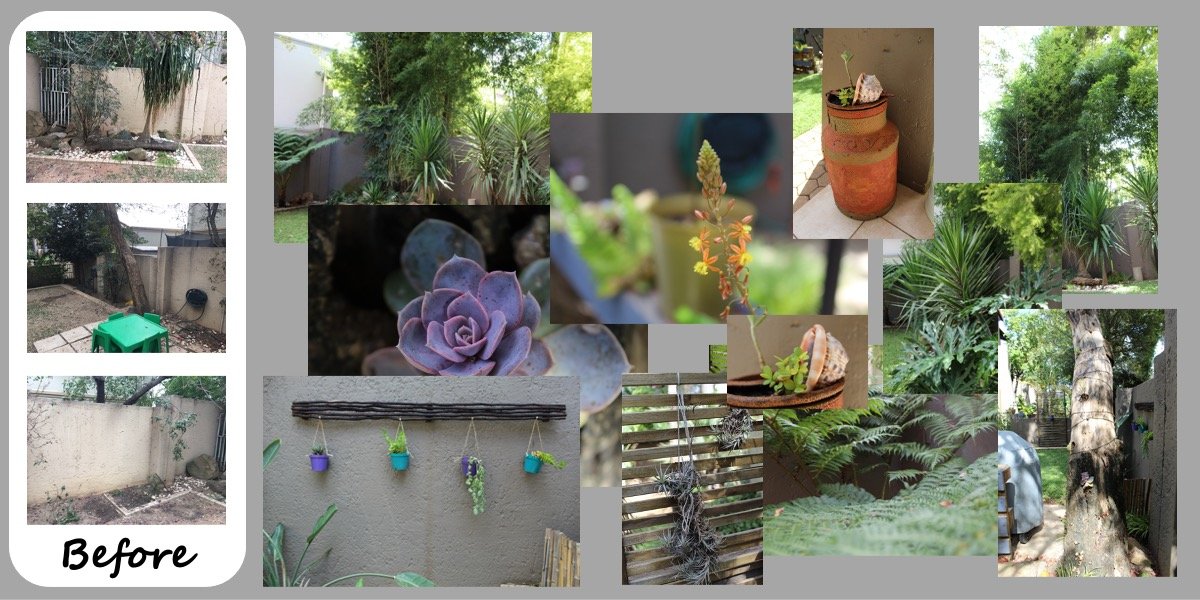 If you read a little deeper, you’ll see there’s a huge analogy here 💁🏻 ‘Project Overhaul’ wasn’t just about my garden, 🌻🌴🌳 but rather about me and who I was going to become as an individual after my disconnection from matrimony.

Part of this transition to independence started when I was retrenched from my 8-4 job while I was still busy with chemo in 2019… and realized that I was completely unemployable due to treatment. So, after a short stint with a business partner, I realized that I wanted to do this on my own and remove the stress of two salaries and just focus on what I needed. 💪🏼 I was terrified, but it was the best decision I have made… it’s worked [or rather it’s always going to be a work in progress - as my business morphs and matures] some months are a little slow but the wheels are turning and I get to be who I am and express myself in a way I have never been able to before.

Lockdown has taught me a lot about who I have become. Who would have thought that I would be content [OK, maybe content is not the best descriptive word for it… untroubled, unconcerned, at ease, tranquil] with staying at home for twelve-months? As it turns out I came out the other side unscathed and still based at home due to my ‘compromised immune system’ I’ve learned that anything can be done with my imagination, my MAC 💻 and a fibre line.

My relationship is stronger than ever… 💏💜 in our first two years together we’ve survived a retrenchment, two start-up businesses, a global pandemic, a cancer recurrence and a partridge in a pear tree! He’s a bit of a Rockstar. 🕺🏼

The minions are my reason for living… every-single-day I am overwhelmed at how lucky I am that I get to be their mom [even right now as I’m trying to write, one is having a tantrum because he can’t play Minecraft on the iPad and the other is way too quiet in her room… let’s hope she didn’t get her nail polish out] 💅🏼. It’s a tough job, as any parent will tell you, but I wouldn’t trade it for all the dollars 💵on earth.

So, back to the garden… I’m looking at it now through the dining room window, 🏠 it’s lush, it’s peaceful, it’s exactly what I want it to be. I’m prepared for the fact that during Winter,☃️ it’s going to die off a little bit, the grass always looks a little browner and we have to water it a little more often. But, there is life under the façade and it will bloom again… [think about that analogy again]

No matter what hits you, and we all have our bad times… no matter what you see on social media, even those with the ‘perfect’ lives still have their troubles. Remember the warmth of the sun is just around the corner, and the storm may seem so restless right now, but without that precious rain, your garden will not grow.

The Garden Personal Blog
72 HAIR | How good is it really?
SO… What’s the point?
A guide to picking the right colour and application.
Comments